This winter has been absolutely perfect for Pine-Richland basketball, and we're not talking weather.

It has been perfection times two. The Pine-Richland boys are 13-0 while the girls are 15-0. Although there are no statistics to prove it, I don't remember a WPIAL school in the past few decades having two undefeated basketball teams this late in the season.

Will both make it through the regular season undefeated? Brian Batko and I discuss that on This Week In High 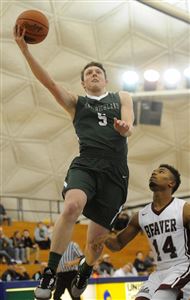 School Sports, which you can check out below. It's not known if a school has ever had boys and girls teams both finish the regular season undefeated, but I would doubt it. I do know that only 13 schools have had boys and girls win WPIAL championships in the same year. But not one of those 13 had two undefeated teams. (Pictured is Pine-Richland standout senior guard Andrew Petcash).

Both Pine-Richland teams obviously are excellent. There is a definite chance they could both finish the season undefeated, but if I had to predict, I'd say it won't happen.

I think the Pine-Richland girls have the best shot at perfection in the regular season. They have only seven games left, but one of them is next Thursday against North Allegheny. That won't be easy. Pine-Richland is the Post-Gazette's No. 1 6A team and North Allegheny (13-1) is No. 2. They met in If the Pine-Richland girls beat North Allegheny, then I say they definitely finish the regular season undefeated because they don't face another strong team.

The Pine-Richland boys have a number of tough games left after tonight. A big one is next Tuesday against North Allegheny.

Last night's Washington-Monessen boys game was certainly an unusual one, but not because both teams are ranked highly in their respective classifications. It was unusual because there were 1,177 victories between the coaches in this game.

Here is the latest This Week In High School Sports Show on Varsity Xtra. We talk about Pine-Richland's perfection, give predictions on the top games in the next week and finish with the wildly popular "Just Askin" segment. One of the questions: Was Antonio Brown's video talent a poor example for high school kids?