It's one of those stories where "I'm committed, but I want to look around."

C.J. Thorpe, a highly-rated offensive senior lineman at Central Catholic High School, made a verbal commitment to Penn State last spring. But he recently decided he wants to look at a few other schools. So, Thorpe (pictured) visited UCLA last 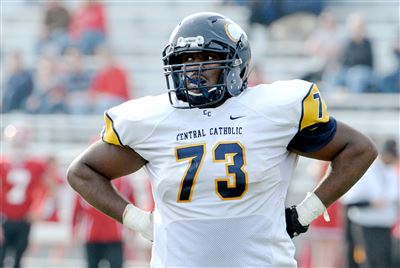 weekend and will go to the University of Michigan the weekend of Jan. 27, said his father, Chris. In between those two visits is an official visit to Penn State this weekend.

"Penn State is where he's committed, but he still wants to make sure, like any decision, that you look at everything," said Chris Thorpe. "He's never really been anywhere but Penn State. I think it would behoove him to say, 'At least I took a lot at another option.' So, he's going to take a look at another option."

It would certainly be a loss for Penn State if it loses Thorpe. He is rated a four-star offensive guard by Rivals.com.

"It's nothing that turned him off about Penn State," said Chris Thorpe. "I think he's doing the smart thing. You never want to make a decision without looking at everything else. I don't have a problem with it. It's probably me pushing him more to do this than himself."

Michigan already flipped one WPIAL recruit this year. Beaver Falls defensive lineman Donovan Jeter originally committed to Notre Dame, but changed his mind to Michigan. He is already at Michigan, enrolled in the spring semester.

Thorpe is another recruiting story with a "stay tuned" tag.