Moon basketball player Jarrod Simmons was born in Princeton, N.J., and Princeton University was one of two colleges on his final list. But when it came time to pick a school, Simmons decided not to return to his roots.

Simmons, a 6-foot-8 senior forward and one of the top players in the WPIAL, made a verbal commitment Saturday to Pennsylvania of the Ivy League. Princeton finished second in the Simmons chase.

Penn had been recruiting Simmons for a while. Coach Steve Donahue was at Moon's game against Mars this past Tuesday. (Simmons is pictured in the Mars game next to Mars standout Robby Carmody). 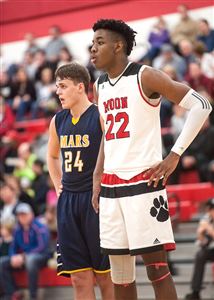 "The coaching staff [at Penn] is one that felt like family to me," said Simmons. "Plus, Philadelphia is not too far from home, and Penn is a program where I thought maybe I could play right away."

This is Simmons' first year at Moon. He grew up in Moon and his family has lived there for a while. But he attended a prep school in New England his first three years of high school. But he decided he wanted to finish his career at Moon.

At one time, some other major colleges were interested in Moon, including Boston College. When Jamie Dixon was at Pitt, he offered Simmons a scholarship at one time.

"The Ivy League was very appealing to my family and myself," said Simmons. "The schoolwork, the academic thing, is very important to my family."

Simmons was recruited to play the "4" position, but believes he could possibly eventually play the "3."

Latrobe's Austin Butler and North Hills' Nick Smith are two of the premier guards in Western Pennsylvania. A week ago, Butler became the all-time leading scorer at Latrobe. Smith likely will follow suit at North Hills this week, breaking a long-standing record. Smith (pictured in a game against Butler) is a senior guard who has scored 1,454 points and needs 13 to break the North Hills record of 1,466. North Hills plays North Allegheny Tuesday.

The North Hills record has been around for 38 years and is held by Ed Crankovic, a 1978 graduate. Crankovic was an excellent player, but also a sad story. Crankovic was going to be a Division I college player, signing with Bucknell as a senior. But Crankovic drowned in a New Jersey hotel pool in June of 1978, a few days after high school graduation.

Smith is averaging 27.2 points a game this season.

Getting back to Latrobe's Butler, he and the Wildcats have a big game Tuesday against Penn Hills. Butler has more than 1,500 career points.