Steel Valley football player Paris Ford created a little stir over the weekend when he told a reporter for Rivals.com that he is considering Miami and might visit Miami. According to Ford's coach at Steel Valley, Ford is still "fully committed" to Pitt. 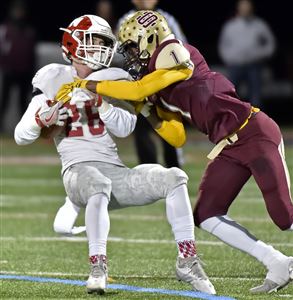 Ford committed to Pitt during his junior year. He is Pitt's top recruit so far and has a bright future. He is a standout defensive back who had a tremendous senior season. Attempts to reach Ford have been unsuccessful, but Steel Valley coach Rod Steele said he met with Ford Monday. (Ford is pictured making a tackle against Neshannock in the WPIAL 2A championship).

"The only thing he told me was he is still committed to Pitt, he has talked with coach [Pat] Narduzzi and everything is good," said Steele.

Steele said Ford will make his official visit to Pitt this weekend, as originally planned. Ford played in the Under Armour All-American Game New Year's Day in Florida.

"He said some guys that he played with in that game were just trying to get him down [to Miami]," said Steele.

When asked if Ford plans to visit Miami, Steel said, "He never mentioned it. The only thing he said was he is committed to Pitt."