Anthony Reid is not afraid to shoot, and shoot often. I've seen him play. Sometimes a number of his shots don't go in. Sometimes, a lot go in. On Friday night, a lot went in - especially in the first quarter. 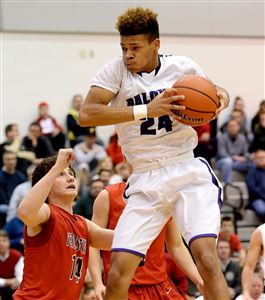 Check out what Upper St. Clair coach Danny Holzer had to say:

"He was unconscious," said Holzer. "I give him credit. He was hitting step-back 3's, and 3's from everywhere. They were winning 16-0 and he had all of their points. Other than T.J. McConnell or Matty McConnell [of Chartiers Valley] going off, that's the biggest barrage of 3-pointers I've seen against us, probably in my entire career."

Before Friday night, Reid was averaging 17 points a game.

It's hard to say how much there is to this, but could Steel Valley football Paris Ford end up playing at Miami and not Pitt?

Rivals.com ran a story Friday night quoting Ford about considering Miami and possibly making a visit to the Hurricanes. Ford made a verbal commitment to Pitt during his junior season.

Ford could not be reached for comment and Steel Valley coach Rod Steele said he has no idea about the Miami situation. He has not talked with Ford lately. He said as far as he knew, Ford was still going to make an official visit to Pitt next weekend.

It would be a huge loss for Pitt if Ford flips.

Hampton lost to Chartiers Valley Friday. That wasn't all that surprising. But Hampton scored only 37 points. That was a head scratcher because Hampton had been averaging well above 70 points a game.

But there was a major reason Hampton struggled offensively. Antonio Ionadi did not play.

Ionadi is a senior guard and one of the best shooters in the WPIAL. He had 31 3-pointers in the first nine games and was averaging 24 points. But Ionadi has a shin injury and did not dress for the game. He watched the game with a protective boot on his leg.

Ionadi is unsure how long he will be out. Hampton will miss him dearly in that rough section.

**** Seeing Quaker Valley play last night, the Quakers are, in a word. good. In two words, real good. They don't have a true post player, but so what. Nowadays, a number of high school teams win plenty without one. Plus, Quaker Valley has good size across the board with a 6-5 Danny Conlan and a few 6-3 or 6-4 players.

This team shoots it well, plays together and has an excellent point guard in Amos Luptak. The Quakers' success is proving once again how Mike Mastroianni is one of the best coaches around. He might not be as well known as some others in the WPIAL, but he is in the upper echelon. Heck, he won a WPIAL title in his first term at Quaker Valley. He won a WPIAL title at Bethel Park. And Quaker Valley is a serious contender for the WPIAL 4A title this year.

Quaker Valley has won loss and it was AT New Castle. Enough said.

**** Brandon Stone, Southmoreland's 6-10 junior center, had another big game Friday with 37 points. He took unofficial trips to Dayton and Butler this week. He is supposed to be at West Virginia today. Those schools have not offered but it will be interesting to see how the level of colleges that do offer Stone. He has a handful of offers already, including ones from Duquesne and Appalachian State.

**** Add Olajawon Owens to the WPIAL All Name Team. Shouldn't they just call him Hakeem the Dream? Olajawon had 12 points for East Allegheny in a big win over Steel Valley Friday.

I also noticed Friday another one for the All Name Team. Jiggz Cabral had five 3-pointers for Brashear. Shoutout to Jiggz.

And like colleague Brian Batko said earlier this year, Quaker Valley has an All Name Team of its own. You have to like any team that starts Wolf, Coletrane and Amos.

**** Nobody is having a better season in WPIAL girls basketball than Amani Johnson. She is averaging 32 points a game. She has suddenly become a serious candidate for Fab 5 at the end of the season, I would think.

**** On Tuesday, Mars at Montour. Robby Carmody vs. Jarrod Simmons. I'll be there.