Some things that fell off my laptop ...

Jeannette coach Adrian Batts always has a highly-competitive team at Jeannette. Two years ago, the Jayhawks played for a WPIAL Class 1A title.

This year's team is 1-5 while playing a tough schedule. But what is suddenly drawing attention to Jeannette's team is the recent addition of a new player who is only a sophomore, but is now at his fourth school in a year-and-a-half.

Anthony Johnson is a 6-foot-3 10th grader who enrolled at Jeannette recently and has played in two games. He scored 28 points in his first game Tuesday against Summit Academy, and then had 19 one night later in a game against Monessen, the No. 1-ranked team in WPIAL Class 1A.

Johnson is the chameleon of district basketball. He has changed school colors with regularity. He has been red and blue, blue and gold, green and white - and now back to red and blue. But a question is will he continue to be eligible to play at Jeannette? Some high school coaches are watching Johnson's case with great interest.

Here's the background: Johnson started his high school days last year at Chartiers Valley. He worked out with the Colts and played in fall league games with them. But he transferred to Lincoln Park before the season began. He played for Lincoln Park, but left that team late in the season. By the spring, he was enrolled at Allderdice.

Mike Bariski, basketball coach and athletic director at Lincoln Park, did not want to get into the situation except to say it was a mutual parting of ways between Lincoln Park's team and Johnson. Bariski said Johnson's father did have an apartment in Midland when his son attended Lincoln Park.

Johnson was on Allderdice's team this preseason. He even played in a scrimmage against other teams. But he eventually wasn't on the squad, left the school and then enrolled at Jeannette. Anthony DiNunzio, Jeannette athletic director, said Johnson apparently moved into a residence in Jeannette's district.

WPIAL executive director Tim O'Malley said an athlete gets presumptive eligibility if he moves into a new district, and no one challenges the transfer was for athletic reasons. However, apparently there are now questions about Johnson's switch to Jeannette. Allderdice coach Buddy Valinsky referred all questions to Allderdice school administration. Principal Melissa Friez would only say Johnson was no longer with the team when he transferred to Jeannette. Friez said the WPIAL will have a hearing on Johnson's eligibility some time in the first week of January.

What will the WPIAL rule? The league could make Johnson ineligible or allow him to keep playing. Obviously, we don't know the reasons why Johnson left the teams/schools. But four schools and four teams in a year-and-a-half? It's something the WPIAL is right in looking into because Johnson's presence on Jeannette's team could affect things greatly. Stay tuned. 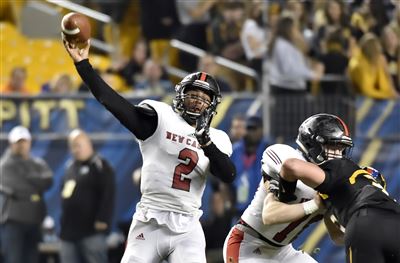 Stone (pictured). He was a good basketball player the past two years, but has taken his game to another level this year, despite a later start than normal. Stone was also a standout quarterback-defensive back on a New Castle team that made it to a WPIAL title game.

But he didn't skip a beat in basketball. He is averaging 22.3 points a game and has 17 3-pointers in four games. But get this: He is shooting a terrific 47 percent from 3-point range.

Stone, by the way, just decided recently where he will play college football. He is headed to a Division I school, making a verbal commitment to Kent State.

It has been reported before how Clairton football coach Wayne Wade could face penalties from the PIAA for criticizing game officials to the media after the Class 1A state championship game. PIAA executive director Bob Lombardi said the league will wait to see what penalties Clairton places on Wade. The PIAA can then accept the penalties or add more.

Tom McCloskey, principal at Clairton, said school administrators and the school's athletic committee are still deciding what, if any, action will be taken.

"We have to report to the PIAA by Jan. 9," said McCloskey.