Central Catholic, Beaver Falls, Steel Valley and Clairton are the four WPIAL teams that will play in the state championships this weekend at Hersheypark Stadium in Hershey. All games will be televised live by PCN. Here is a breakdown of the games: Statistically speaking: Central Catholic's J.J. Younger has rushed for 1,694 yards on 141 carries and has more than 1,000 yards in the past six games. QB Troy Fisher (pictured) has rushed for 582 yards on 77 attempts and fullback David Green 362 on 33 attempts. ... Fisher has completed 78 of 135 for 1,754 yards. ... For St. Joseph's, University of Georgia recruit D'Andre Swift has rushed for 1,403 yards on 122 attempts, despite missing most of six games with an ankle injury. Marquez McCray has completed 137 of 238 for 1,993 yards. The scoop: Many have been anticipating this final all year. St. Joseph's is ranked No. 13 in the country by USA Today. North Penn had St. Joe's on the ropes last week, but Swift came alive in the second half and the Hawks won by 35-25. ... Both teams are big on the lines and both rely heavily on the run. St. Joe's might go how Swift goes. ... But whoever can make a few big pass plays might be the winner.  ... Run support from Central Catholic's DBs should also be a factor along with CC defensive line play against the run.

History lesson: Two years ago, Swift ran for 226 yards on 23 carries when St. Joe's beat Pine-Richland in the 4A state title game.

Championship history: Neither team has ever played in a PIAA title game. 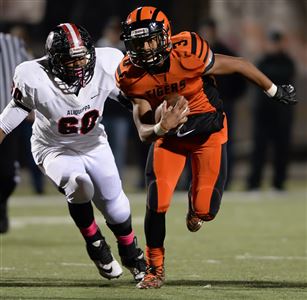 The scoop: Shepherd (pictured) will be a key. Many times, he lines up at QB and takes direct snaps in the wildcat formation. ... Both teams rely on a running game, but more so with Beaver Falls. Snavely gives Middletown a little more versatility on offense. ... Middletown averages 249 yards a game rushing, but Beaver Falls has size on the defensive front and some excellent middle linebackers who might shut down the run.

History lesson: Before this season, the last time Beaver Falls won a WPIAL title was 1984. Athletic director Jim Carbone was on that team.

Statistically speaking: Steel Valley's DeWayne Murray has scored 46 TDs this season, has rushed for 2008 yards and is averaging 13 yards a carry. He has over 6,000 yards for his career. QB Ryan Harper has completed 97 of 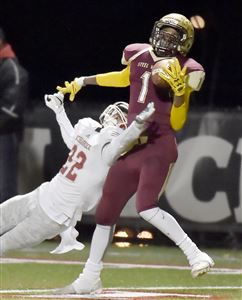 The scoop: Is there a game with more differing traditions? ... Steel Valley has been one of the most dominant teams from the WPIAL - ever. The Ironmen have invoked the mercy rule in every game this season and the first-team defense has allowed only two touchdowns. But it's hard to believe there will be a blowout in this game. I'd say Steel Valley is still the favorite, but Southern Columbia usually does fine - no matter the opponent. Southern Columbia lost to a strong Clairton team by only 35-19 in 2011. ... Southern Columbia usually has a team that doesn't beat itself with turnovers. Steel Valley feasts on turnovers. Watch for Ford. I have a feeling he will impact this game somehow in a big way.

History lesson: Although you need two hands to count Southern Columbia's championship appearances, the Tigers went through a stretch of losing in the 1A title game six times in seven years.

Championship history: Clairton is trying for its fifth title. The Bears lost in the championship in 2008 and 2015. The 2015 loss was to Bishop Guilfoyle. The Marauders are the two-time defending state champs and have a 46-game winning streak.

Statistically speaking: Clairton's Lamont Wade has rushed for 2,298 yards on 163 attempts, good for a surreal 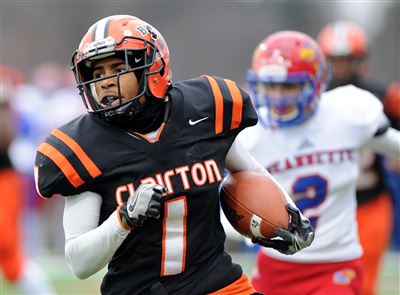 The scoop: Wade has said all year he is on a mission to get a state title because he doesn't have one in his four years with the Bears. You hate to be so basic, but this game could come down to simply whether Guilfoyle can control Wade, or if he makes a couple big plays. ... Clairton's defense has been superb all season. The Bears' ability to control Guilfoyle's running game will have a huge bearing on the game. ... Watch for Howard. A big play by him here or there has greatly impacted some games.

History lesson: Twenty-seven years ago, Clairton lost in the 1A semifinals to Keystone, 15-14. Wayne Wade was a QB-DB for that Clairton team. He is now the Bears' coach. Keystone scored with 2:52 remaining and then were successful with a fake extra-point kick for the two-point conversion.