HomeSportsVarsity BlogWPIAL championship rewind: After making history, Palko on verge of another milestone

There is an "L" in Bob Palko's last name. That's about the only time you associate an "L" with him.

Maybe we should just go ahead and call him Bob Pawko. Because this guy is all about the "W's." 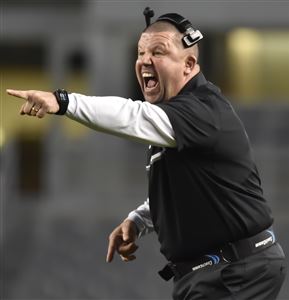 No one in the history of WPIAL football has won more championships than Palko. He won No. 8 Friday. But he is one win away from another impressive milestone.

Palko has 199 career wins. He has a chance for No. 200 when West Allegheny plays in the PIAA quarterfinals Friday against Meadville. The game is tentatively scheduled for 7 p.m. at North Allegheny.

Palko became West Allegheny's coach in 1995. His record is 199-66, an impressive .750 winning percentage. (Palko is pictured in yesterday's championship).

I'd go ahead and call him one of the best coaches in WPIAL history - in any sport. The culture he has created, the program he has built, at a public school is impressive. He doesn't always have the best players, either. But man, does Palko and his staff know how to build strong teams. His staff is excellent and they somehow get kids to buy in to everything and work extremely hard in the offseason.

I've covered West Allegheny's program since Palko became coach. Now I know there were some questionable calls in that title game Friday and the McKeesport faithful are not happy. But that doesn't take away what Palko has done at West Allegheny. The culture of that program doesn't exist in many places - anywhere. Even outside the WPIAL. I don't know if people around here fully realize what Palko has done at a school that never had much success until he took over. And it's his alma mater.

Check out highlights from that great West Allegheny-McKeesport 5A final:

Here is the list of coaches with the most WPIAL titles:

6 – George Novak, five at Woodland Hills and one at Steel Valley

6 – Art Walker, five at Mt. Lebanon and one at Shady Side Academy

Here is McKeesport coach Matt Miller on Palko's decision to go for the two-point conversion and the win in overtime.

"It didn't surprise me," said Miller. "They were getting pretty decent chunks of yards and I think we were moving the ball pretty good, so it makes sense.

"The whole game comes down to one play at the end. I was just coming off after the timeout [before the two-point conversion] and was like, 'God, this is, like, over if we don't stop it.' It felt like we were just going to keep exchanging blows for a while. And all of a sudden, it was like you just collapse. Like your heart sunk."

How coincidental that Quinton Hill rushed for 248 yards for Thomas Jefferson in Friday's 4A final, tying for the

third-most yards in a game at Heinz Field or Three Rivers Stadium. He tied former Thomas Jefferson RB Orlando Torres, who ran for 248 in 2007.

Torres ([pictured to the left in the 2007 title game against Montour) was certainly a talented runner, but I might remember him most for his nickname. I still remember Torres telling me after a game, "They call me the 'Streakin Puerto Rican."

Hill is the all-time leading rusher at Thomas Jefferson and now has more than 4,300 yards.

Beaver Falls not a surprise

Some were surprised at Beaver Falls' victory against Aliquippa. But really, it should surprise no one.

I think we forget that this was supposed to be possibly Beaver Falls' year. Coach Ryan Matsook had a truckload of starters back from last season. This team had talent, size and speed. Many thought the Tigers were the No. 1 team in 3A before the season. But then came that bad loss to Aliquippa in the first game.

Shoutout to Matsook for keeping things together and not letting the ship sink after the Aliquippa game.

This was not a great Aliquippa team. Even coach Mike Zmijanac said before the title game that Beaver Falls was probably better. Doesn't matter. Beating Aliquippa is huge for Beaver Falls.

**** Zmijanac will retire soon from Aliquippa, but it won't be now. He has a handful of starters back on both sides of the ball. I say possibly after next season he hangs it up.

**** Of all the WPIAL champions, it's hard to say who has the best chance to win a state championship. Maybe Beaver Falls? But the Tigers will likely have to play a strong Hickory team in the semifinals. Hickory is ranked No. 1 in the state by the Post-Gazette.

**** Beaver Falls is off next week. I don't know if Matsook and his staff think that is a good or bad thing.

**** The Class 2A and 1A semifinals are tonight. A few sources have told me Clairton QB Noah Hamlin might not play because of an injury. That's just what I'm hearing. That would be a gigantic loss for Clairton against Northgate.

**** Did you know Bishop Guilfoyle (Altoona) now has a 44-game winning streak? Guilfoyle plays in Class 1A, but the team will play through the eastern side of the bracket. The WPIAL champ would not meet Guilfoyle until the state final.

**** Central Catholic's 42-7 victory against Seneca Valley was the biggest blowout in a title game in the largest class since Woodland Hills beat Central Catholic, 41-6, in 2001.

Check out highlights and comments from Beaver Falls' victory against Aliquippa: