Today is the first day for required heat acclimatization practices for teams in Pennsylvania, and we continue a series previewing the district. Today, we look at Class 5A and 6A.

Here are the top returnees in offensive categories (regular season stats only):

1. UPPER ST. CLAIR - It's somewhat hard to pick a No. 1 team in this classification, which has a number of teams that used to play in the WPIAL's largest classification. A number of the teams you would consider for top billing were hit hard by graduation. But then again, all those teams have long-established programs that are strong year after year. So, we'll go with Upper St. Clair, a team that features a few standout individual players, as well as the winningest coach in WPIAL history in Jim Render. 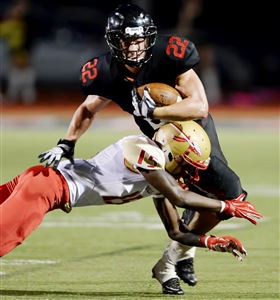 The Panthers seemingly have enough to be strong and will play in an interesting new conference, which also features Woodland Hills, West Allegheny and North Hills. Upper St. Clair features offensive lineman Gabe Houy, who just made a verbal commitment to Pitt last week. He is one of the headliners in this classification, but one of the best all-around players is Thomas Vissman (pictured), who was one of the leading rushers in the entire WPIAL last year and also is a standout on defense. Vissman already has committed to Yale.

Quarterback play will be a key for USC, but other top returnees are lineman Jay Pollock and linebacker Eli Grape.

2. WOODLAND HILLS - This was one of those teams hit hard by graduation. Woodland Hills had 12 players make either first-team, second-team or honorable mention all conference. All 12 of them were seniors. But the reality is that Woodland Hills always has players, always has some size - and still has George Novak as coach.

3. PENN-TRAFFORD - The Warriors are coming off one of the greatest seasons in school history, making the WPIAL championship game before losing to Central Catholic. But 18 starters have graduated.

"Fortunately, we return four offensive linemen who started at least seven games each," said Penn-Trafford coach John Ruane. "We have talent at the skill positions with guys who have waited their turn to get on the field."

At quarterback, the baton has been passed from brother to brother. Cam Laffoon, a junior, will take over from his brother, Brett, who was terrific a year ago.

4. WEST ALLEGHENY - The Indians were a Class AAA power and now they play in a conference with a number of teams that used to be in the largest classification. West Allegheny features a top lineman in Kieran Firment, who made first-team all-conference a year ago as both an offensive and defensive lineman. Firment recently made a verbal commitment to Colorado State. I can't tell you the last WPIAL player to sign with Colorado State. Has there ever been one?

Also back is quarterback Nick Ross. The top two rushers graduated - Terence Stephens and Whitney White. But Kenny White is back after showing some promise a year ago. West Allegheny has one of the top kickers in D.J. Opsatnik.

5. McKEESPORT - It's a changing of the guard at McKeesport. George Smith retired as coach. But the Tigers will probably still look a lot like Smith's old teams. That's because the new coach is Matt Miller, who was a longtime assistant under Smith. McKeesport features one of the area's best defensive linemen in Curtis Harper, who recently committed to Syracuse.

Here are the top returnees in offensive categories (regular season stats only):

1. CENTRAL CATHOLIC - This team is everyone's favorite in 6A. A story in today's P-G talks about Central Catholic's talent and national rankings. As good as the Vikings were last year in winning WPIAL and state titles, they might be even better this year. The Big 3 are getting attention. They are lineman C.J. Thorpe (Penn State recruit) and two Notre Dame recruits - linebacker David Adams and lineman Kurt Hinish. But the Vikings are so much more. The entire offensive line is headed to either FCS or FBS schools. Lineman David Green and linebacker Tim Terry have Division I offers. And quarterback Troy Fisher (pictured) is now 6-5, 220 and has a few scholarship offers. A key with Central Catholic is always the running game. Leading rusher Ronnie Jones graduated, but J.J. Younger showed promise at times last year with 418 yards on 40 attempts. Also, watch out for Justice Evans, who sat out last year after transferring from Kiski Area. The WPIAL ruled him ineligible in 2015.

2. PINE-RICHLAND - The Rams have only four returning starters on offense and defense, but look to be strong again. 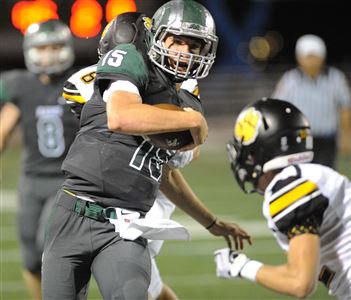 It's certainly nice when one of those four returning starters is one of the best junior quarterbacks in the country. Phil Jurkovec (pictured) threw for more than 2,000 yards and ran for more than 1,000 last year. In the spring, he made a verbal commitment to Notre Dame. Look for him to be even more polished than his sophomore year.

Developing a set of reliable receivers will be key. But the Rams also have been bolstered by the addition of 6-7 senior TE-DE Grant Carrigan, a transfer from Weir, W.Va., who has a few Division I scholarship offers.

3. NORTH ALLEGHENY - The WPIAL created a "super conference" in its new alignment, putting Central Catholic, North Allegheny and Pine-Richland in the same conference. The other conference in 6A appears much weaker. North Allegheny looks to be one of those strong teams. The Tigers have a few Division I recruits and a top playmaker at quarterback in Ethan Maenza. The Division I recruits are lineman Josh Lugg (pictured), who committed to Notre Dame before his junior year, and tight end-lineman Griffin Sestilli, a Temple recruit. Other returning starters are Niko Mermigas and RB Mike Pope.

4. MT. LEBANON - This team was good last year and might be even better this year. Eight starters return on offense and seven on defense. Leading the returnees is 6-3, 185-pound receiver Jack Young and running back-linebacker David Harvey. Young caught 29 passes in the regular season and is getting Division I college interest.

5. BETHEL PARK - Coach Jeff Metheny calls his team young and inexperienced. Five starters return on offense and four on defense. But the Black Hawks figure to be Mt. Lebanon's top challenger in the Southeastern Conference.

Terron Murphy rushed for more than 1,000 yards last season and figures to be one of the best RBs in 6A. James Gmiter is a top lineman.