More than two decades ago, Kevin Price was a supreme athlete at Duquesne High School who quarterbacked the football team to a PIAA title and also was a basketball star who won two state titles.

Shamyjha Price is a sophomore starter and one of the top players on the Bishop Canevin girls team that plays for a state title Saturday afternoon in Hershey. Her father will be there, maybe wearing the T-shirt that has a picture of himself and his daughter on the front with the words "Like Father, Like Daughter." The below picture is the proud Dad after Bishop Canevin's semifinal win Tuesday night.

Price was the Post-Gazette Athlete of the Year in 1994 and is still the second-leading scorer in WPIAL history with 2,635 points. Valley's Tom Pipkins is first with 2,838 points.

After his career at Duquesne High School, Price went on to have a nice career in basketball at Duquesne University.

Pine-Richland coach Jeff Ackermann says he preaches to his role players about making the little plays.

"They all have to step up," Ackermann said, "and make the 'other' plays, the loose balls, defend, take a charge, whatever it is."

With Pine-Richland's top two scorers having an off game in points, Rausch had the best scoring game of his career. Rausch (pictured below) scored 18 points and was big in Pine-Richland's 64-58 victory against Butler in a PIAA Class 6A quarterfinal today in front of a capacity crowd at North Allegheny. 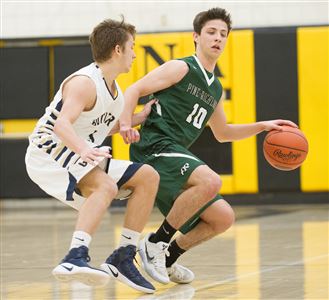 Rausch, a senior guard, hadn't scored in double figures since Jan. 27 - against Butler. He is averaging only five points a game for the season.

"When we came into this game, I wouldn't think he would be our leading scorer, but he was," said Ackermann.

Andrew Petcash, Pine-Richland's leading scorer at 20 points a game, was held to eight. Butler played a diamond-and-one defense on Petcash for much of the first half and then defended him well in a man-to-man defense the rest of the way. Petcash took only six shots.

Phil Jurkovec, Pine-Richland's second-leading scorer at 16 ppg, made only 4 of 12 shots and scored 11. Andrew Kristofic had 12 points and eight rebounds, but only one point in the second half.

Like the first three meetings between these two, this one was close. Pine-Richland led at halftime, 32-31. Pine-Richland opened up a seven-point lead early in the fourth quarter, but Butler closed to 57-55 on Tyler Frederick's two free throws with 1:23 left.

But Rausch made two free throws 22 seconds later, and Butler missed three shots and had a turnover on their next four possessions.

Freshman Ethan Morton showed his wonderful talent again, leading Butler with 21 points. He had 14 at halftime, but Jurkovec guarded him in the second half and held him to seven. Jurkovec finished with seven rebounds and four blocked shots. Joel Stutz had 15 and Frederick 12 for Butler.

"We're up one at the half, Phil and 'Cash had combined for eight points and Morton had 14," said Ackermann. "So I thought we were in a good spot. I thought Phil would be Phil and 'Cash would be 'Cash. But I felt like we could control Morton. Phil kind of stopped his dribble penetration in the second half and made him just a shooter."

Butler made only 5 of 23 3-point shots. Afterward, Butler coach Matt Clement got emotional talking about his team.

"Every senior class is important to you and every person who puts on this uniform is important for me," said Clement. "But these guys were just different."

Pine-Richland will play in the semifinals Tuesday against Carlisle, which defeated Emmaus, 76-74, in double overtime in another quarterfinal Saturday.

Meadville 53, Mars 46: Cade Hetzler scored on a layup to cut Meadville's lead to 47-46 with 1:46 to go, but Mars didn't score again and lost this 5A game. Robby Carmody scored 25 points for Mars, but had only two in the fourth quarter when Meadville outscored the Planets, 14-6. Mars held Armoni Foster (27 ppg) to 13 points, but Simeal Wofford scored 21.

Strong Vincent 68, New Castle 43: David Morris, who has more than 2,000 career points, scored 28 to lead Strong Vincent to the Class 4A win against the WPIAL champs. Morris had only six points at halftime, but scored 17 in the third quarter when Strong Vincent turned a seven-point lead into a 15-point advantage. New Castle was shooting 45 percent from 3-point range in the playoffs, but made only 20 percent (3 of 15) in this game. Marcus Hooker had 20 points for New Castle, but Geno Stone, the team's leading scorer, made only 1 of 9 shots and scored four.

Quaker Valley 77, Middletown 66: Quaker Valley's balanced attack has been evident all season and it was again in this 4A game as five players scored in double figures. Danny Conlan led with 20, Coletrane Washington added 18, Ricky Guss 13, Amos Luptak 12 and Wolfie Moser 12.

Lincoln Park 70, Washington 58: Lincoln Park's Nelly Cummings scored 23 points and moved into seventh place on the WPIAL all-time scoring list in this Class 3A game. Cummings passed Danny Fortson (2,331 points) and now has 2,344 points. He is 32 points away from sixth place, held by 1955 Wampum graduate Don Hennon. The win sets up a semifinal rematch with North Catholic. Lincoln Park lost to North Catholic in the WPIAL final.

Sewickley Academy 61, Greensburg Central Catholic 46: Sewickley Academy was ahead in this Class 2A game by five at halftime, but broke things open when it outscored GCC, 22-12, in the third quarter. Sewickley Academy shot 53 percent from the field overall and were a sizzling 17 of 26 from two-point range. Justin Pryor scored 19 for Sewickley and Nate Ridgeway 13. Chris Groetsch was held to 4.

Bishop Canevin 66, Our Lady of the Sacred Heart 60: The Crusaders jumped to a 15-point halftime lead and held off a rally by OLSH in a 2A game. Walter Bonds and Kellan Gustine combined for seven 3-pointers. Bonds finished with 24 points and Gustine 12. Mitchell King added 14 and Julian Bonds (Walter's twin brother) 12.

Monessen 74, Saltsburg 34: Saltsburg had a 26-1 record, but you really have to wonder about this team's competition after it was walloped by the WPIAL Class 1A champ Greyhounds. Jaden Altomore scored 27 for Monessen.

The PIAA today announced sites and times for second-round games. Here is the schedule for all WPIAL and City League teams.

GIRLS CLASS 2A - Greensburg Central Catholic vs. Camp Hill at Altoona, 6 p.m.; Chartiers-Houston vs. Bellwood-Antis at Hempfield, 6 p.m.; Our Lady of the Sacred Heart vs. Leechburg at Baldwin, 6 p.m; Vincentian vs. Bishop McCort at Hempfield, 7:30 p.m.

Back in 2002, Ralph Blundo said "I do" and the little boy who carried the ring for the ceremony was named Amos.

Who would've thunk that, 15 years later, the groom and the ring bearer would go against each other for a WPIAL championship?

Heck, these days many teams that win WPIAL basketball championships get rings. So this story could have a ring involved again.

The Ralph Blundo-Amos Luptak saga is a great little storyline to the WPIAL Class 4A boys championship that will be played out Saturday afternoon when New Castle meets Quaker Valley at Petersen Events Center. Blundo is the highly successful New Castle coach, who is going for his fourth WPIAL title today. He wasn't New Castle's coach when he was married.

Luptak, meanwhile, is the talented senior point guard for Quaker Valley, a four-year varsity player who has been a big key in the Quakers' run to this year's title game.

But 15 years ago, Blundo married his wife, Kate, and the ring bearer for the ceremony was Luptak. The two aren't related so you may ask what in the world is the tie between Luptak and Blundo? Well, Kate Blundo was a "nanny" for the Luptak family when Amos was young. So Amos was asked to carry the ring.

Check out little Amos below on the big day:

That was the "Then" picture of Amos. And here is the "Now." 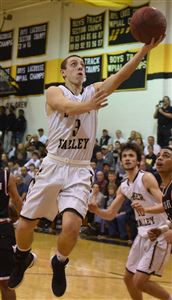 It's a boy-girl thing. championships for the school in Cranberry. The North Catholic boys defeated Lincoln Park, 56-51, to win the 3A title Thursday night at The Pete.

In the history of the WPIAL, a school has won boy and girl championships in the same year only 13 times. But the boy-girl sweep is not new at North Catholic. The Trojans and Trojanettes won both in 2009. The first school to win both was Beaver Falls in 1985.

Here are the schools that have won boy-girl championships:

Chartiers-Houston won a WPIAL girls championship for the first time in school history Thursday night. The Buccaneers' coach is Laura Montecalvo. Winning and coaching runs in her family.

Maybe you've heard of Montecalvo's father, Guy, a highly successful football coach for many seasons at Washington High School who finished his career at Canon-McMillan. Dad won two WPIAL titles and one PIAA championship at Washington.

Laura Montecalvo was an outstanding three-sport athlete at Washington in volleyball, basketball and track and field and won 12 varsity letters. She is in her third season as Char-Houston's coach and has done an excellent job. Heck, you could maybe make a case for her as coach of the year in the entire WPIAL. And with four juniors in the starting lineup, included dominant forward Alexa Williamson, could there be another championship in the Montecalvo family future?

It was pretty motion offense. coach Mike Bariski said after the game that his team just missed too many open shots. But many of those shots were contested. Nelly Cummings, who averages 29, made only 4 of 23. He rarely had an easy shot. Just take a look at the photo from P-G's Matt Freed of Cummings trying to score over North Catholic's Dom Serventi.

*** The Monessen-Imani Christian game was no thing of beauty. You can call the contest "chippy" and we'll leave it at that. Both teams will be in the PIAA playoffs next weekend, but Imani will be without leading scorer Kenny Robinson. He got a technical early in the game and another one late. The second one counted for his fifth foul. And two technicals means an automatic ejection and also ineligible to play the next game. So Robinson is out for the PIAA game.

**** This is the year for fresh faces in the WPIAL championships. I don't ever remember so many freshmen in the title games who have made such big impacts. On the boys side, freshman Ethan Morton starts at point guard for Butler and he will have a Division I college future. He just continues to impress. He has turned into the leader of that team on the court.

Our Lady of the Sacred Heart's point guard is freshman Donovan Johnson, whose brother, Cam, plays for Pitt. Freshman guard Isaac DeGgregorio comes off the bench for Hampton and played a gigantic role in the Talbots' semifinal victory against Mars. Sewickley Academy uses a few promising freshmen off the bench. On the girls side, Chartiers Valley Megan McConnell is doing big things as a freshman. Maybe you've heard of her brothers, T.J. and Matty, or her father, Tim. At Blackhawk, guard Mackenzie Amalia (pictured) is a terrific freshmen who already has Division I college interest. She averages in double figures and has 57 3-pointers for the year.

**** This is the first year the WPIAL opened up the "Oakland Zoo" seats on the first level of The Pete. But the seats are reserved and tickets for the seats are $20. Judging from last night, those tickets aren't exactly going like hotcakes. Wonder if more people will be willing to shell out the $20 the next two nights, when the crowds should be bigger.